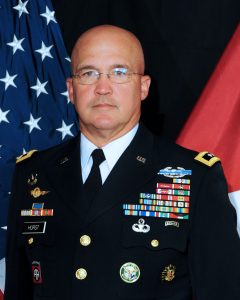 Major General Karl Horst retired from the United States Army on October 1, 2013 after more than 40 years of enlisted and commissioned service.  During that time, he had the privilege to lead Soldiers at every level of the military, at home and around the world, in peacetime and in combat.

In his last assignment on active duty he served as Chief of Staff for U.S. Central Command at MacDill AFB, Tampa.  His last command assignment was as the Commanding General of Joint Force Headquarters National Capital Region and the Military District of Washington.

Upon retirement, General Horst followed an atypical career path and went into the automobile industry where he was a General Manager in a major automotive group.  Following his passion as a leader, General Horst authored the book “Common Sense Leadership,” with ten leadership lessons learned during his time in the military.  While he lectures on the subject of leadership and National Security issues, he also leverages his experience from the Middle East, lecturing on the contemporary geo-political and religious challenges of the Middle East and the Levant.  Additionally, General Horst has experience as a consultant supporting a strategic consulting firm in Annapolis, Maryland.  From June 2018 to December 2019, General Horst served as the President and CEO of the Congressional Medal of Honor Foundation.  He is now an independent consultant and active on the lecture circuit.

He received his bachelor’s degree from the United States Military Academy at West Point and a master’s degree in Public Administration from Shippensburg University of Pennsylvania.  He is a graduate of the National Automotive Dealers Association (NADA) Dealer Academy and attended the University of North Carolina Kenan-Flagler Business School Executive Development Program. He is also a graduate of the U.S. Army War College.

Karl resides in Tampa with his wife of more than 37 years, Nancy.  They have three grown children and seven grandchildren.