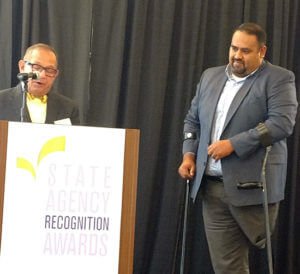 Erick is an Army veteran with combat tours in Iraq. He began his military service as a combat engineer specialist. He was determined to gain experience in the construction engineering field in the Army and to apply those skills in his post-military career to establish a solid business livelihood.
His path to this goal did not go as he expected. During a combat tour in Iraq, Erick sustained major injuries from a rocket attack on his Humvee. After years of physical rehabilitation, he decided he still had what it took to follow his original plan of developing a business in the construction industry.

This veteran U.S Army Sergeant began by earning a college degree; he graduated from Arizona State University with his bachelor’s degree and went on to earn a graduate degree in accounting. With these accomplishments completed, he put his plan into action. Because of superior business plan preparation and maximizing his veteran benefits, Erick was able to acquire the financing to purchase a small construction firm.

Within the first 90 days of operation, KSE construction has been awarded over two million dollars in government contracts and continues to show momentum in the contract capture phase of the plan.

How did Erick accomplish this? He recognized that the network to which he belongs by virtue of his membership in the Alliance was an asset that could help him grow his business. Having California DVBE certification was certainly valuable in the highly competitive construction market, because the state is currently experiencing a construction boom, especially in the transportation sector.

Erick’s first objective upon winning this work was to hire more veterans when he closed on the initial contracts.

KSE Construction understands that the relationships developed as a USVBA member can be the catalyst to success. Erick Castro and KSE Construction appreciates the Alliance’s dedication to helping disabled veterans become
successful in the government contracting market and looks to pass on their success in the way of subcontracting to other Alliance members.

KSE has a policy to “sub-contract to DVBE’s first” and conduct regular outreach meetings with DVBE’s. “Recognizing that I can call on my fellow vets to help me succeed is a huge advantage,” Erick says. “This is a concrete example of how the ethic of ‘vets helping vets’ acts to the advantage of all of us.”

Erick’s tremendous work and dedication earned him the USVBA Louis Zamperini Inspiration Award in 2016. He’s been featured in the short film Latinos Living the American Dream directed by Eva Longoria. He was also honored by the VA when he won the Disabled American Veteran Freedom Award in 2007.

The 34 Deadliest Jobs in America

5 Things Veterans Can Do When They Hate Their Jobs